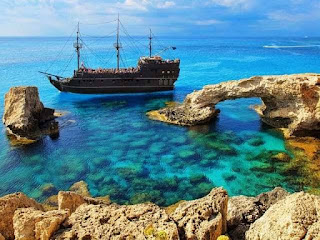 In this article, dear readers will talk about the history of the magnificent island of Cyprus, which is a landmark in European history.
.
The historical view of the floating islands in the Roman or Mediterranean lagoon was purely military, and until recently Great Britain was keen to occupy Cyprus and Malta because of their strategic importance to serve its military presence in the nearby colonies and to this day maintains a military presence in these two countries. Although its military influence has receded internationally.

For Muslims, since the conquest of the Levant and Egypt - until the Ottomans' time - Cyprus was a thorn in their side where the fleets of enemies were launched, which led them to occupy it to secure its forehead. The then governor of the Levant, Muawiya bin Abi Sufyan, asked Caliph Othman bin Affan - may Allah be pleased with him - to authorize the construction of a naval fleet to face the ships of the enemies. Against other Muslims.

Three centuries later, the Byzantines returned to take control of the island. During the Crusades, fate smiled again for the king of Jerusalem, Guy de Lozian, who lost his throne at the hands of Saladin after the famous Battle of Hattin in 1187, when King of England Richard the Lionheart offered him He led the Third Crusade to buy Cyprus, which he seized. He could not control it.

During the Mamluk period, the Sultan of Egypt succeeded in annexing Cyprus to his authority after a long history of Cypriot attacks on the coasts of Egypt and the Levant. Days then they left the city, and repeated such a campaign against the city of Tripoli, and remained so until Sultan decided to subordinate Cyprus to his authority and left a majestic fleet of the city of Rashid boat two hundred ship managed to occupy the whole of Cyprus in 1426 AD and the capture of its king Janis, who brought handcuffed to the castle Lev De himself and returns to Cyprus humiliated as Deputy Mamluk Sultan in exchange for payment of an annual tribute and submission of Cyprus to the Mamluk state.

These conditions remained until the arrival of the Ottomans during the reign of Sultan Selim II in 1571 to get rid of the sites used by the Venetians for acts of piracy in the Mediterranean against them, and the Turks allowed the people of Cyprus Orthodox to practice their religious rites after harassment by Catholic Venetians, and in 1878, Britain took the right to administer Cyprus with The British vetoed this treaty after Turkey declared its standing with Germany during the First World War in 1914.


And share it through various social media sites.
You can also read a lot of other articles about Cyprus in terms of its geography and economy and how it is a destination for many tourists To enjoy its nature and its historical monuments at the same time.

Number of countries in the European Union

What are the European countries ?

European continent Continent Europe is one of the seven continents of the world, and is the second smallest i…

Malta .. A homeland lives in a fort

Is it a volcano? Or are they North African islands thousands of years ago? The deer from the sun's glare …